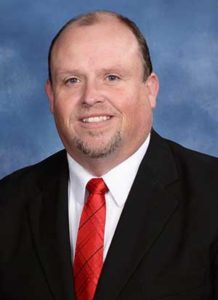 Stephen D. Phillips is the General Superintendent of the Congregational Holiness Church. He was selected to this position by the General Committee of the Congregational Holiness Church in early 2021 to serve the remainder of the quadrennial term due to the passing of Bishop Hanson and Bishop Hicks during a most turbulent year of 2020. He has previously served the denomination as 1st Assistant General Superintendent, 2nd Assistant Superintendent, General Treasurer, West Carolina District Superintendent, General Home Missions & Evangelism Director, and General Christian Education Director. Stephen is also the Lead Pastor of Christian Heritage Church in Graniteville, South Carolina, a capacity he has served in since 2002, following the passing of his father, the late Dennis Phillips (1943-2002). Under his leadership, the congregation has experienced growth, with over 700 in weekly attendance. Since 1990, he has served the church in a variety of capacities, including Associate Pastor, Youth Pastor, Minister of Christian Education, and Worship Leader. In addition, he serves on the Board of Trustees of Emmanuel College in Franklin Springs, Georgia, and a member of the Advisory Board of Security Federal Bank in Aiken, SC. Stephen received a B.S. in Religion from Emmanuel College in Franklin Springs, Georgia, and an M.A. in Ministerial Leadership from Southeastern University in Lakeland, Florida. He and his wife, Sherry, have been married for 31 years. Sherry is an Elementary School Principal in Augusta, Georgia, where she serves Warren Road Elementary. Stephen & Sherry have two sons. Both of them were married in 2020, and both serve in ministry. Caleb is married to Kasandra and is the Online Pastor of Christian Heritage Church. Joshua is married to Jess and is the Worship Pastor of Christian Heritage Church.

Director of History and Archives