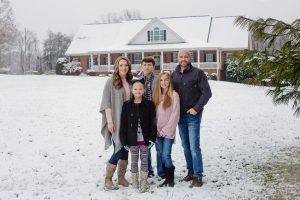 Back in March, I decided to take my family’s small dog, Samson (that’s a
joke, because Samson is a Great Pyrenees) out for a walk and enjoy the
beautiful weather. With the recent blistering cold, it was nice to have an
unseasonably warm day.   We were walking along at a rather fast pace (he
was dragging me most of the way) but he continued to abruptly start and
stop because something had his attention.  Curious as to what he was doing,
I observed that he had noticed his shadow and he was very intently trying
to “catch it.”  I don’t know about you, but I seldom give much thought to
my shadow. Unless something draws my attention to it, I don’t look at it,
nor do I think about what it might touch.
Just like shadows, we all have an unconscious influence that follows us
everywhere we go.  Whether we think about it or not, we cannot separate
ourselves from the impact we have on the lives of others, whether that
influence is negative or positive.
For example, Germany will forever be known for the influence of one evil
man.  Although Adolf Hitler has been dead for over seven decades, their
history looms under his negative shadow even today.  But consider the
powerful influence and the shadow of the cross of Jesus.  No other event in
the history of mankind has or will ever have the kind of impact that the
crucifixion had.
In the book of Acts, we can read about many amazing and powerful stories
revolving around the early church and the revival that swept across the
middle east region.  The apostles and Christ followers boldly presented a
new message of hope, healing and redemption.  It was causing such a stir
that people literally brought their sick friends and loved ones and laid
them onto the streets believing that if at least the shadow of a disciple
fell upon them, they would be made whole and well.
Consider the influence of your shadow.  Your shadow will not have a
positive or Godly effect unless you are willing to commit to the following:
1) You must be consistent when it comes to living out your faith.  Godly
influence doesn’t come by just talking the talk, but you must walk out your
faith with character and integrity – honoring God in all that you do.  2)
You must be willing to generously give of yourself and help and serve those
in your community, family and church.  3) You must be obedient to the
standards of God that are found in His Word, and you must be willing to
share the good news of your faith more than ever before, because the fact
is, the world is desperately needing something that is real and
transformational.  I believe the gospel of Jesus Christ is a message worth
casting.
It is up to you and I to begin casting Godly shadows upon those around us.
God could have placed us in any point in history, but He chose for us to
live right now.  May we continue to strive for even better, but remember
the “even better” can’t happen without you sharing the power of the risen
Savior.